The World Moves in Swivels and Bops: real gamers don’t use wifi

Disclaimer statement: George did computer studies in 1980, submitting his programs on punchcards. He still remembers the telling off from the technician he got for inadvertently programming an infinite loop that hung up the VAX for the whole night. Given time he can multiply in hexadecimal but doesn’t speak Klingon.

As though it wasn’t obvious, Rhadegund HQ is, as my friend says, baching it. Amongst the minor pleasures this brings; hanging as many plastic aeroplanes as we like from the ceiling, leaving the current construction project on the coffee table for the varnish to dry, I found myself surprised but not apprehensive in PB Technologies buying a 10 metre patch cable. When I said I wanted a light colour the enthusiastic young man offered me one in rescue orange and I even thought about it for a moment before opting for the beige.

I was sure I was over buying cables to connect to the internet. The world has moved on. In my latest
office I just bring along my laptop and log into the wifi by a separate profile by way of work-life balance. At home even the TV chats to my fibre broadband about TVNZ on Demand through the aether. I was sure cables had gone the way of the rather wonderful screechy gurgle of the dial-up modem.

And now I have a cable running under the window and around the gas heater to the back of, yes, a large black box. It turned out my son’s heart’s desire, into which he invested a lot of his own money and only some of mine, came in a big tower case like the one for the computer I bought in the 1990s. Once we got it out of the huge cardboard box that Mighty Ape (who are wonderful, by the way) sent it in and fired it up it was immediately obvious that the wifi wasn’t good enough to download the software for the games it was bought for.

What? It’s the 21st Century! How could it not work? We admired the strange blue light in the box for a while and went back to our laptops. Who would sell a $1000 computer with wifi that is worse than a $90 phone?

People who care about these things, obviously. In the shop the next day (with my instructions to get it sorted by the time school finished), the enthusiastic young man told me gamers don’t use wifi. His computer is connected to (his parents) broadband by a 30 metre cable, which I am guessing is orange and causes his mother real pain. Wifi is too slow when you are shooting zombies controlled by your school friends in the surrounding suburbs. The slightest delay and you are dead before your return shot has reached the router. Our big black tower case mostly contains the best graphics card you can get for the money and the $20 wifi adapter is in there by ‘popular demand’ (from the Dads, I suspect). When it first came out they didn’t bother. It’s a Gaming Rig – not a toy. 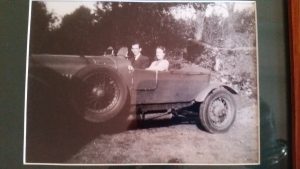 My father professed the same attitude to car batteries and starter motors. Does it make it go faster? Does it improve the handling? Why are we bothering? Oh, riiiight, convenience. Just pass me that handle. But the 4 ½ litre didn’t come to New Zealand with them and even racing cars have batteries now (along with wifi).

The cable under my window looks like a step backward. A low tech solution. But it’s needed to get to the cutting edge. Technology doesn’t develop; it evolves. With each new development pushing one area forward, it leaves others behind and we have to go back for a work-around until they catch up. It used to be that you played games in an arcade because home computers were uselessly slow. Not so long after that all the kids came round with their controllers to play on the console because the internet was too slow for multiplayer. Now it’s the wifi that’s the choke point.

I’m sure that someone out there is taking so much heat for the orange cable across the living room that they are working on a wifi that will give them useful access to their parent’s broadband. Once they get it working, it will turn up in the gaming rigs and the high-end computers and finally work its way into my lap-top where I’ll wonder how I managed without it.

I’m not so fussed about performance but I like it when computers get faster and easier. This machine works much faster than I can type but I still hate having to go back to my emergency PC which takes seconds to load files. I thought it was fine at the time and I’m guessing that in a couple of years this one will feel ridiculously clunky and slow. I can’t imagine what going back to the 386 the electronics technician at work built for me in 1992. It felt pretty special then. I like the convenience of wifi and the fact that everything works without me having to really understand it.

So it won’t be me driving the next wave of technical innovation, it will be the kids with their cables and their desire to squeeze one last millisecond out of their gaming rigs.
But I’m expecting to be paying for a fair chunk of it.

View all posts by: Rhadegund