It’s not what you don’t know that kills you

Disclosure Statement: George usually ties his tie with the ‘Nicky’ and occasionally the ‘Oriental’. He is inclined to be judgmental of people who use the ‘Pratt-Shelby’. 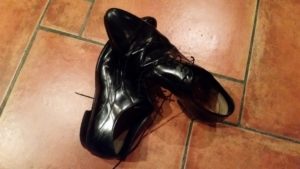 I have always been keen on knots. I think it comes from Dick Callum worrying how John would feel about the knots he used to rescue the cragfast sheep in “Winter Holiday.” I felt for him and wanted, when the occasion inevitably arose for me, to do a better job. Perhaps my father should have given more thought to the long term effects of reading his old Arthur Ransome books to me as a child.

I finally managed to get in some practice with knots when I was a Girl Guide – the mascot for a Ranger Troop my mother looked after. From there I can remember the reef knot, clove hitch, bowline and the hangman’s noose (I wonder now if the last was part of the official curriculum, those Rangers had a surprisingly macabre sense of humour). I’ve pretty much been able to do everything I’ve needed to with these so far [1] (without recourse to the noose yet). The bowline will be good for that cragfast sheep when I do come across it. I haven’t yet.

When it came to ties my mother taught me the ‘four in hand’ as I started secondary school and my father the ‘half Windsor’ when he had to be seen in public with me wearing one. He thought the ‘four in hand’ showed a lack of effort and the full Windsor’ was, well, showy. The sort of thing you might expect from a man who would abdicate a throne. It turned out I am the sort of person who is was very pleased to get ‘The 85 ways to Tie a Tie [2]’ for their birthday when I was given it a few years back. Now I can tie nine of them.

But the very first knot I ever learned to tie was the bow. My mother convinced me that I couldn’t go to school until I’d learned to tie my own shoes: little brown lace-ups with crepe soles. I pretty much had it down pat when I set out on the first day but when they came undone, I couldn’t manage to re-tie them under the pressure of the teacher’s gaze and cried, worried I’d be sent home. She was quite surprised when she got out of me what the problem was: tying shoes hadn’t been on her list of requirements.  I’m guessing my mother looked a little guilty when she showed me how to do a double bow that evening.

Tying double bows became automatic. I could sit on the end of my bed, bare foot, and get up two minutes later ready for the day without another thought. Left sock, right sock, left shoe, left bow, right shoe, right bow – with my attention wholly given to Morning Report. Always a double bow because if I didn’t they’d come undone during the day.

So I was wrong from the start. I’ve known for years that a bow is just a reef knot with the ends tucked in to make it quick to untie. The whole point of a reef knot is that it doesn’t slip under pressure. The more you pull on the two sides the tighter it gets.  But if you tie a reef knot badly you end up with a granny knot and they sometimes slip and sometimes jam.

It was Dave Ackerley who set me right. He came around to drop off some exam scripts and casually mentioned a talk he’d been to that pointed out how most people tied their shoes the wrong way. Granny knots with their ends tucked in, not reef knots. Then the laces slip so you have to do a double knot, which defeats the whole point of a bow because they take two hands to undo. If your bows slip then you are tying them wrong. Damn.

So, basically for the last 51 years I’ve been making a fool of myself.

All that smug ‘right over left then left over right’ when knots tied by friends, partners and family members slipped.

As Mark Twain says, “It’s not what you don’t know that kills you, it’s what you know for sure that ain’t true.”

It took a bit of effort but now I have got used to tying my bows the other way (you can tell when you get it right because the loops go side to side across the shoe, not up and down). And they don’t slip.

I wonder what else I know for sure will turn out to be foolishness.

View all posts by: Rhadegund